The Curse of Monkey Island, a really nice adventure game sold in 1997 for Windows, is available and ready to be played again! Time to play a graphic adventure, comedy, sea pirates / caribbean and puzzle elements video game title.

The Curse of Monkey Island is a compelling, funny, and smart adventure from start to completion. You are once again Guybrush Threepwood and must assemble a crew of mighty pirates who are willing to venture off to the dreaded Blood Island in hopes of turning your true love, Elaine, a now golden statue, back to normal, while fending off LeChuck and whatever minions he decides to throw at you.

Like most other LucasArts games of the adventure genre, The Curse of Monkey Island uses a point-and-click interface. With it, you can look at objects and pick them up and speak to the many people you will find throughout the game.

Players will also have to solve many puzzles. Some are obvious, standard adventure game fare, and some are complexly difficult. All in all, the puzzles tend to be well-balanced and quite funny, such as turning yourself into Pollo Diablo (Devil Chicken) to scare people.

The cast of characters in this game are very clever and quite humorous. Each of them are funny in their own ways and are all voice acted to perfection. There are even some star voice actors, such as Gary Coleman as the hilarious Lenny the Foulmouth.

At certain points in the game, players will have to battle it out using pirate ships. Like the other Monkey Island games, fights are done through insults. There are a multitude of insults to be made, and they are all funny (or stupid, depending on your sense of humor). Whoever comes up with the best or snappiest comeback, wins.

The graphics in Curse are wonderful. All locations and characters are hand drawn, very detailed, and colorful. It has a bit of a cartoonish look that fits in perfectly with the subject matter of the game. The voice acting, as stated earlier, is perfect. In fact it's so good, characters are actually given personalities because of the voice acting. The music is also topnotch, pirating adventure music.

The only downfall of Curse is that it seems to end abruptly. The game is 2 CD-ROMs; what seems like a very long game gets cut a bit short with an anticlimactic--and somewhat early--ending. This doesn't really affect the enjoyment of the game, but it could have been a little longer. 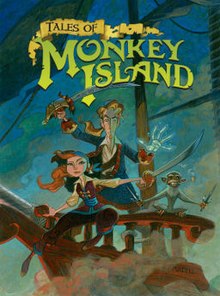 That aside, The Curse of Monkey Island is a magnificent game that almost any adventure game fan should be able to enjoy. Its great fun and humorous attitude should appeal to most gamers. Those who have been waiting for the third installment of the Monkey Island series are in for a real treat, as this is the best one. Those who aren't familiar with the series would be wise to purchase Curse and experience the magic that has been captivating fans for years.

Sound: All the characters' voice acting is terrific and funny. The music consists of a pirate/reggae soundtrack and fits in exceptionally well with the content of the game.

Enjoyment: With the humorous content, the game is extremely fun and enjoyable. Minecraft sp 1.8.1 free download maccleverbm pc. Though it is possible to get stuck from time to time with a few very obscure and frustratingly hard puzzles, the majority of the game is nicely paced and not too difficult.

Replay Value: With an additional mode of play--the Mega-Monkey, featuring more puzzles--the game can be replayed a few times without being too boring.