If you want to play one of this year's best games, then Nintendo has you covered. As part of the Black Friday gaming deals, you can grab a Nintendo Switch Lite bundled in with Animal Crossing: New Horizons and three months of Nintendo Switch Online for just £10 more than the cost of the console itself. 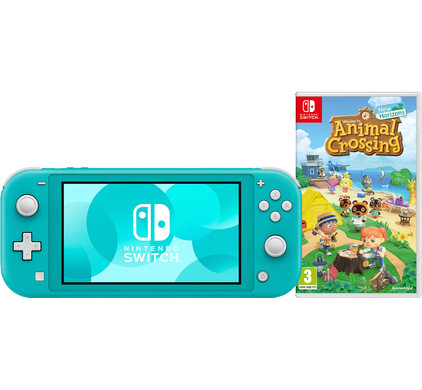 The Switch Lite is the compact, lightweight version of Nintendo's latest console. It supports almost all of the same games as the Switch itself, but doesn't come with the signature Joy-Cons - instead, it's handheld only, meaning that while you can't dock it to play on your TV, it's perfect if you're used to playing while on the move.

This bundle includes the console itself (in either the Coral or Turquoise colour schemes), a download code for Animal Crossing: New Horizons, and three months of Nintendo Switch Online (RRP £6.99), which is required to engage with the online features of most Switch games. Given that the Switch Lite on its own normally goes for £199.99, chuck the online subscription in on top and you're getting one of the best games of 2020 for the equivalent of less than £10.

Animal Crossing: New Horizons is a great way to start your Nintendo Switch collection, but if you're hoping to expand it further, check out these Black Friday Nintendo Switch deals - whether you're in for the madcap competition of Mario Kart or Super Smash Bros or the replacement Joy-Cons you'll need when you get blue-shelled on Rainbow Road, you're sure to find whatever you need.

Nintendo Switch Lite (Coral) Animal Crossing New Horizons bundle £209.99 at Amazon UK If you want to grab one of the best games of 2020 cheap without waiting ages for Nintendo to run a sale, this is likely to be your best bet. With three months of Nintendo Switch Online bundled in too, this is the equivalent of grabbing New Horizons for around £3.

Nintendo Switch Lite (Turquoise) Animal Crossing New Horizons bundle: £209.99 at Amazon UK If you're keen to grab a Nintendo-related bargain but you want it in turquoise, this is your chance. Whether you opt for a Coral or Turquoise console, this deal (and the game attached to it) remains excellent.