Most weekdays, U.S. Immigration and Customs Enforcement (ICE) has published data on the number of COVID-19 tests administered to people detained in immigration facilities, the number of detained individuals with confirmed cases of the virus, and a by-facility breakdown of those who have tested positive. Yet for a full month until April 28, ICE provided no information regarding the number of tests it had performed. In recent days, ICE has begun to disclose by facility the number of individuals who have tested positive who are in isolation or otherwise being monitored, as well as the number who have died while in custody following a coronavirus diagnosis. The data paint a grim picture of a virus that has spread quickly and dramatically within detention facilities and throughout the network of facilities around the country—and of a federal agency that has ignored commonsense measures to halt its spread.

The data also hint at the existence of a problem far more significant than what the agency has acknowledged. Although ICE has slowly and reluctantly agreed to release these reports, gaps in the data raise significant questions that must be answered if solutions are to be identified that protect human life and promote public health.

Download Sex Offenders And Preventive Detention Book For Free in PDF, EPUB. In order to read online Sex Offenders And Preventive Detention textbook, you need to create a FREE account. Read as many books as you like (Personal use) and Join Over 150.000 Happy Readers. We cannot guarantee that every book is in the library. Detention is an atmospheric horror game set in 1960s Taiwan under martial law. Incorporated religious elements based in Taiwanese/Chinese culture and mythology, the game provided players with unique graphics and gaming experience.

As of June 4, the last day before writing for which ICE provided both the number of positive tests and the cumulative number of tests administered, data show that 3,146 detainees had been tested for the coronavirus and 1,623 cases had been confirmed. Of those 1,623 positive cases, 781 individuals were in custody under isolation or monitoring. Since ICE began reporting data at the end of March, two individuals have died while in ICE custody after testing positive for the virus in detention, and at least one person has died of COVID-19 after being released from custody. Partially reflecting the spread of the virus throughout facilities over the past two months and the increased use of tests, the total number of individuals who have tested positive in detention continues to rise on a steep trajectory.

A note on the data

On Monday, June 8, ICE reported that 5,096 tests had been conducted as of Friday, June 5—a jump of 1,950 from Thursday to Friday. On June 9, ICE announced that one week earlier, it had offered voluntary COVID-19 testing to anyone detained at two facilities—the Northwest Detention Center in Tacoma, Washington, and the Aurora Contract Detention Facility in Aurora, Colorado. This likely means that a substantial portion of the almost 2,000 additional tests were administered in only two of ICE’s more than 200 facilities.

While ICE included in the release results for the 450 individuals who agreed to be tested at the Northwest Detention Center, ICE’s press release states that results for an undisclosed number of tests administered in Aurora have yet to be returned; as of June 15, this is still the case. Without these results, it is impossible to determine an accurate positive test rate for the 5,096 tests administered as of June 5, not to mention the positive test rate for the unknown number of individuals who have been tested in the days since that date.

In light of this, Figure 1 includes a positive rate as of June 4, the last date for which ICE has provided all relevant data to perform such an analysis. Including the huge increase in total tests performed without having any information about how many of those tests will return positive results would artificially deflate the positive rate.

Perhaps even more alarming is the fact that more than 50 percent of all the individuals tested until June 4 had tested positive. Public health experts look at this positive test rate to determine whether enough people are being tested to catch most infections within a given population and whether the right mix of people are being tested—not only those who are symptomatic but also those with mild or no symptoms. The Center for American Progress recommends that states achieve a positive test rate of 2 percent before they relax their stay-at-home orders. Even as the numbers of new cases are rising in states including Arizona, Florida, North Carolina, South Carolina, and Texas,* the level of testing nationwide has ramped up over the past few months and shows that the positive test rate has generally decreased. Over the past 14 days, most states have still been above a positive test rate of 2 percent, but nearly all states are at or below 10 percent. In no state is the overall positive test rate even close to as high as that of immigration detention facilities. (see Figure 1)

The positive test rate for people in ICE custody may be this high because tests are being administered to too few people and generally only people who are symptomatic. If so, ICE’s failure to adequately test makes it impossible for facility operators to identify and isolate infected individuals for treatment and prevent further spread. On the other hand, the rate may be this high because detention facilities are the perfect environment in which the virus can spread; the high positive test rate may simply reveal the high incidence of illness in the detention system. This would mean that ICE’s practices—from cohorting exposed detainees to transferring infected detainees throughout the country—have actually facilitated the spread of the coronavirus. One group of researchers recently concluded that 72 percent to nearly 100 percent of detained people may eventually be infected. Last week, the Vera Institute of Justice released a model finding that the actual number of people infected in ICE detention may be 15 times higher than what ICE has reported to date.

While cumulative data are helpful, understanding how the virus is moving through a population and whether testing strategies are keeping up requires breaking the data down into smaller pieces. Based upon the ICE data, CAP identified the number of tests administered and the number of positive COVID-19 cases reported on a daily basis. Figure 2 shows that since late April, the number of individuals in detention who have tested positive for the coronavirus has largely plateaued, even as the overall number of people detained decreased by nearly 5,000—from 29,675 people to 24,713 people.

Flaws in the data

But the data also reveal serious flaws. First, because ICE presents data as positive tests and total tests, instead of reporting the standard positive, negative, and pending tests, it is not possible to construct a reliable daily positive rate. To illustrate this point, for 5 of the 26 days with data from April 30 to June 4, the number of daily positive tests exceeds the number of tests administered. This anomaly may be the result of different test processing times among various laboratories, as well as delays between viral tests being administered and tests being processed.

Moreover, although ICE updates on a weekly basis the number of people detained in its facilities and now reports the number of individuals currently in detention who have received a positive diagnosis and are being isolated or monitored, the data on tests performed and cumulative positive cases confirmed include individuals who are no longer in ICE custody. As a result, while it may appear that ICE has tested approximately 12 percent of the detained population as of June 4, this number actually fails to account for the churn of individuals in and out of facilities; more than 58,000 people have passed through ICE’s detention system since the first detained person was confirmed to have the coronavirus. Based on ICE data, it is impossible to say what percentage of individuals detained today have been tested.

Interpreting the numbers gets even harder when looking at the data reported for individual detention facilities. While the cumulative and current numbers of confirmed and isolated or monitored cases in each facility are published daily, ICE is not releasing the number of tests administered by facility or the number of people being housed in each facility; it has also not made the capacity of these facilities readily available. Moreover, while ICE reports confirmed positive cases at 59 facilities, as of May 4, there were 221 facilities authorized to house ICE detainees for any period of time.

This raises a number of questions:

Public health responses to a pandemic must be informed by reliable data. The federal government’s ongoing failure to provide adequate data regarding the coronavirus in immigration detention facilities is frustrating efforts to protect the health and safety of detained people, facility staff and their family members, and communities at large. The public, press, and members of Congress should demand greater transparency from ICE in order to make informed decisions about important matters of public health and public safety. Sen. Chris Coons (D-DE) did just that during the recent Judiciary Committee hearing, pressing ICE and the Bureau of Prisons to provide facility-by-facility testing data. Improving the data that are published on ICE’s website—providing information without gaps and at the appropriate level of granularity and detail—would be a step in the right direction.

But it is only a step. For months, medical professionals, correctional health experts, elected leaders, and advocates have urged federal immigration officials to substantially reduce the number of people in detention facilities. Federal judges around the country have upheld the constitutional rights of detainees, ordering ICE, over its objection, to review the detention population and release certain individuals. Yet while the population is slowly decreasing, much more still needs to be done. 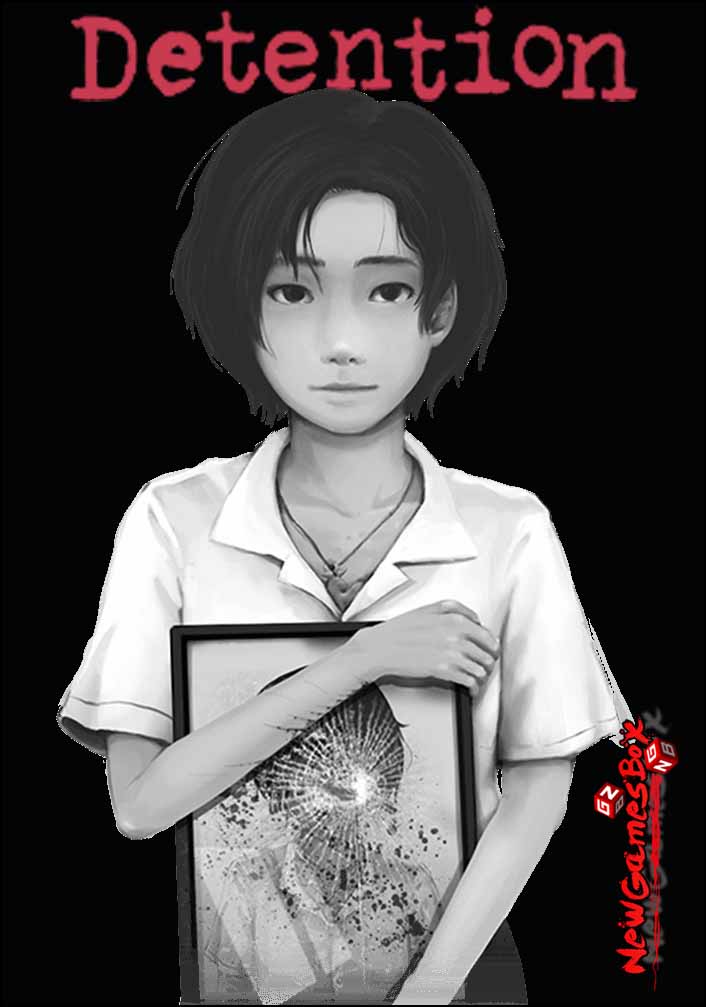 To find the latest CAP resources on the coronavirus, visit our coronavirus resource page.

Download Detention for free on PC this page will show you how to download and install the full version of Detention on PC.

Detention (Chinese: ¨¿”¦ ¡; literally: ˜Returning to School;) is a survival horror adventure video game created and developed by Taiwanese game developer Red Candle Games for Steam.Greenwood high school, located in a remote mountainous area, two students found themselves trapped and vulnerable. The place they once knew has changed in unsettling ways, haunted by evil creatures. To escape, they must explore the mysterious campus filled with ominous objects and puzzles. How will they survive in this ever threatening environment? Could they return to safety in one piece?Set in a fictitious world in the 1960s Taiwan under martial law, Detention, the story-driven atmospheric horror incorporated East Asian elements rarely used in games.

The download is for Detention file size is 1.30GB